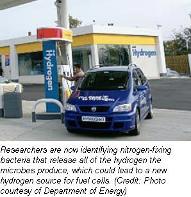 A new green technology developed cooperatively by ARS and us at North Carolina State University (NC State) could lead to production of hydrogen from nitrogen-fixing bacteria. The patent invention could provide a source of hydrogen for use in fuel-cell technology. Fuel-cell devices combine hydrogen and oxygen to produce electricity and water and are considered efficient, quiet, and pollution free. Fuel cells are now being tested in a range of products, including automobiles that release no emissions other than water vapor. ARS scientists Paul Bishop and Telisa Loveless and NC State scientists Jonathan Olson and José M. Bruno-Bárcena developed the technology, which is now available for licensing